What is Private Equity?

Private equity is an alternative investment class and consists of capital that is not listed on a public exchange. Private equity is composed of funds and investors that directly invest in private companies, or that engage in buyouts of public companies, resulting in the delisting of public equity. Institutional and retail investors provide the capital for private equity, and the capital can be utilized to fund new technology, make acquisitions, expand working capital, and to bolster and solidify a balance sheet.

Private equity investment comes primarily from institutional investors and accredited investors, who can dedicate substantial sums of money for extended time periods. In most cases, considerably long holding periods are often required for private equity investments in order to ensure a turnaround for distressed companies or to enable liquidity events such as an initial public offering (IPO) or a sale to a public company. 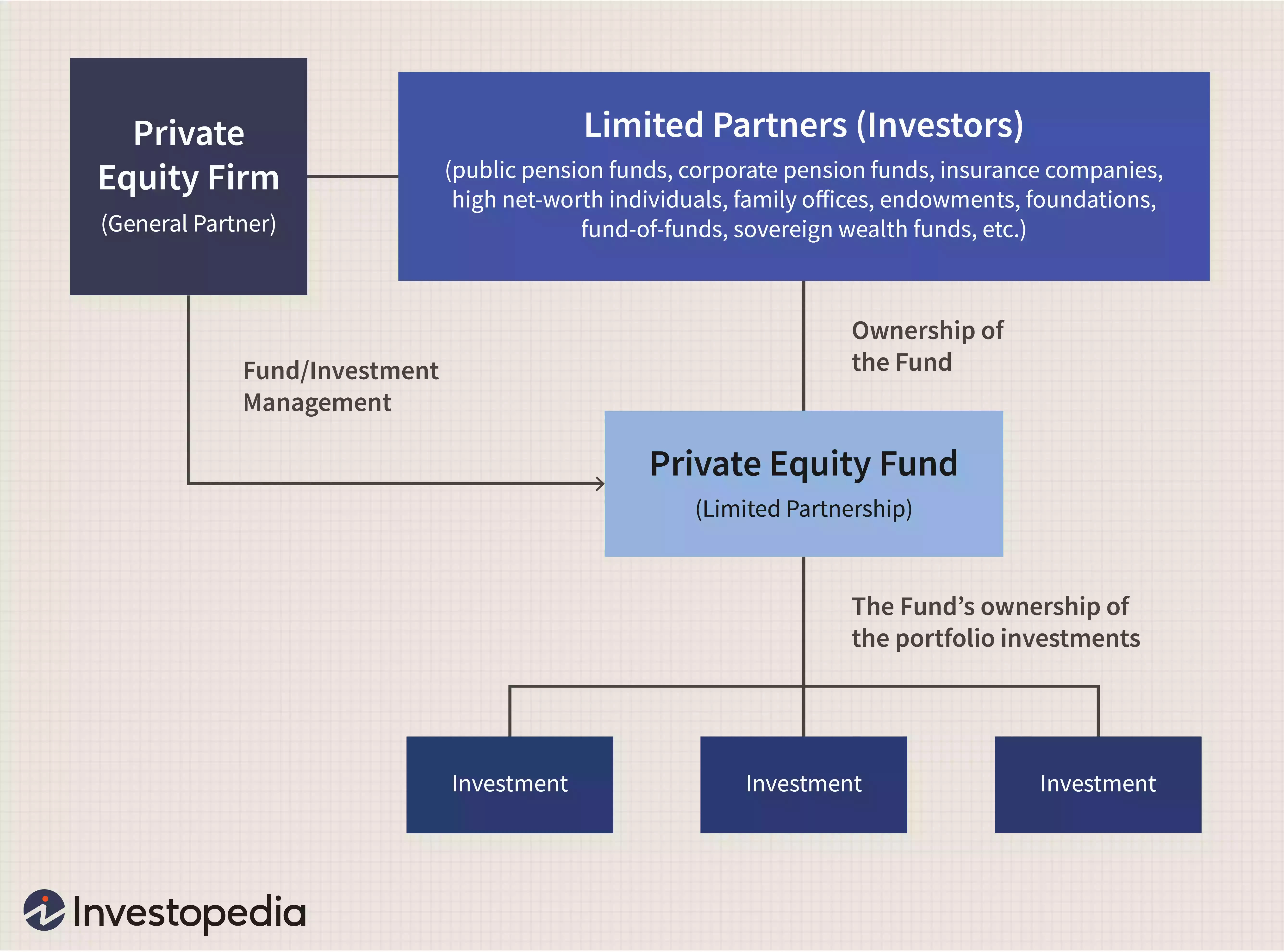 Private equity offers several advantages to companies and startups. It is favored by companies because it allows them access to liquidity as an alternative to conventional financial mechanisms, such as high interest bank loans or listing on public markets. Certain forms of private equity, such as venture capital, also finance ideas and early stage companies. In the case of companies that are de-listed, private equity financing can help such companies attempt unorthodox growth strategies away from the glare of public markets. Otherwise, the pressure of quarterly earnings dramatically reduces the time frame available to senior management to turn a company around or experiment with new ways to cut losses or make money.

Private equity has unique challenges. First, it can be difficult to liquidate holdings in private equity because, unlike public markets, a ready-made order book that matches buyers with sellers is not available. A firm has to undertake a search for a buyer in order to make a sale of its investment or company. Second, pricing of shares for a company in private equity is determined through negotiations between buyers and sellers and not by market forces, as is generally the case for publicly-listed companies. Third, the rights of private equity shareholders are generally decided on a case-by-case basis through negotiations instead of a broad governance framework that typically dictates rights for their counterparts in public markets.

While private equity has garnered mainstream spotlight only in the last three decades, tactics used in the industry have been honed since the beginning of last century. Banking magnate JP Morgan is said to have conducted the first leveraged buyout of Carnegie Steel Corporation, then among the largest producers of steel in the country, for $480 million in 1901. He merged it with other large steel companies of that time, such as Federal Steel Company and National Tube, to create United States Steel – the world’s biggest company. It had a market capitalization of $1.4 billion. However, the Glass Steagall Act of 1933 put an end to such mega-consolidations engineered by banks.

Private equity firms mostly remained on the sidelines of the financial ecosystem after World War II until the 1970s when venture capital began bankrolling America’s technological revolution. Today’s technology behemoths, including Apple and Intel, got the necessary funds to scale their business from Silicon Valley’s emerging venture capital ecosystem at the time of their founding. During the 1970s and 1980s, private equity firms became a popular avenue for struggling companies to raise funds away from public markets. Their deals generated headlines and scandals. With greater awareness of the industry, the amount of capital available for funds also multiplied and the size of an average transaction in private equity increased.

When it took place in 1988, conglomerate RJR Nabisco’s purchase by Kohlberg, Kravis & Roberts (KKR) for $25.1 billion was the biggest transaction in private equity history. It was eclipsed 19 years later by the $45 billion buyout of coal plant operator TXU Energy. Goldman Sachs and TPG Capital joined KKR in raising the required debt to purchase the company during private equity’s boom years between 2005 and 2007.1 Even Warren Buffett bought $2 billion worth of bonds from the new company. The purchase turned into a bankruptcy seven years later and Buffett called his investment “a big mistake.”

The boom years for private equity occurred just before the financial crisis and coincided with an increase in their debt levels. According to a Harvard study, global private equity groups raised $2 trillion in the years between 2006 and 2008 and each dollar was leveraged by more than two dollars in debt. But the study found that companies backed by private equity performed better than their counterparts in the public markets. This was primarily evident in companies with limited capital at their disposal and companies whose investors had access to networks and capital that helped grow their market share.2

In the years since the financial crisis, private credit funds have accounted for an increasing share of business at private equity firms. Such funds raise money from institutional investors, like pension funds, to provide a line of credit for companies that are unable to tap the corporate bond markets. The funds have shorter time periods and terms as compared to typical PE funds and are among the less regulated parts of the financial services industry. The funds, which charge high interest rates, are also less affected by geopolitical concerns, unlike the bond market.

How Does Private Equity Work?

Private equity firms raise money from institutional investors and accredited investors for funds that invest in different types of assets. The most popular types of private equity funding are listed below.

Positions in a private equity firm are highly sought after and for good reason. For example, consider a firm has $1 billion in assets under management (AUM). This firm, like the majority of private equity firms, is likely to have no more than two dozen investment professionals. The 20 percent of gross profits generates millions in firm fees; as a result, some of the leading players in the investment industry are attracted to positions in such firms. At a mid-market level of $50 to $500 million in deal values, associate positions are likely to bring salaries in the low six figures. A vice president at such a firm could potentially earn close to $500,000, whereas a principal could earn more than $1 million.

Beginning in 2015, a call was issued for more transparency in the private equity industry due largely to the amount of income, earnings, and sky-high salaries earned by employees at nearly all private equity firms. As of 2016, a limited number of states have pushed for bills and regulations allowing for a bigger window into the inner workings of private equity firms. However, lawmakers on Capitol Hill are pushing back, asking for limitations on the Securities and Exchange Commission’s (SEC) access to information.